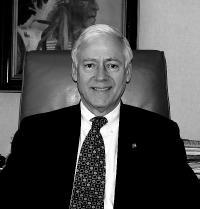 Tom Meuser serves as chairman of El Dorado Savings Bank. He previously served as  chairman and chief executive officer since 1991. He has been with the bank for more than 41 years, previously serving as the bank’s chief appraiser, chief loan officer and president.

He earned a bachelor of arts degree from St. Mary’s College of California, and attended graduate school at California State University, San Francisco.