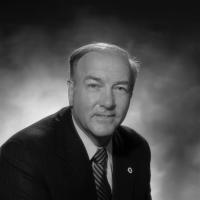 His 35-year career in banking includes five years in London with First Interstate Bank’s International and Capital Markets Group and five years in Singapore with London-based Standard Chartered Bank. As group manager of Standard Chartered Bank, Buster directed the activities of 700 banking officers and 3,000 total staff throughout the Asia Pacific region. He began his banking career with First Interstate Bank, where he served in numerous capacities, including chief credit officer, real estate, corporate banking and as general manager in London prior to the sale of the wholesale bank to Standard Chartered.

Buster is a graduate of the University of Southern California, where he earned his bachelor of arts and master of business administration degrees. His  background includes service in law enforcement. He committed in 1999 to a two-year assignment as chief operating officer for the District Attorney of Los Angeles County. More recently, he joined the Alameda County Sheriff’s Air Squadron as a qualified pilot-in-command and disaster service worker. He is also the chairman of Bay Area Crime Stoppers.