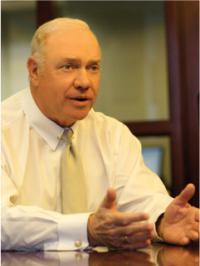 Don Johnson was one of the original organizers and founders of American Business Bank, which is a commercial bank specializing in serving the middle market business community.

Don obtained his undergraduate degree from the University of North Carolina. After college, he was a full lieutenant in the U.S. Navy and served a tour of duty in Vietnam. He earned his MBA from Pepperdine University.