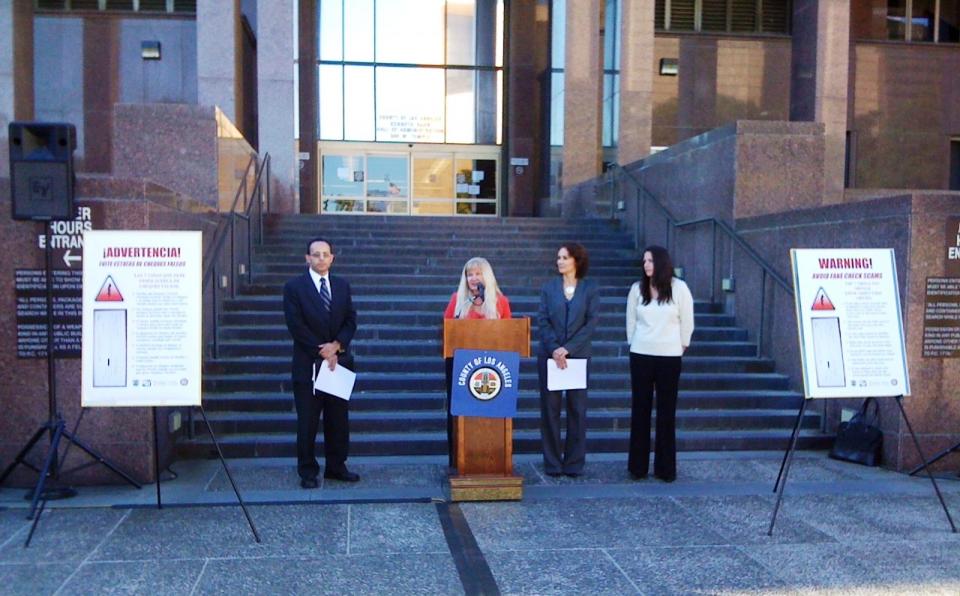 LOS ANGELES, CA – Today, the Los Angeles Department of Consumer Affairs, the California & Nevada Credit Union Leagues, the California Bankers Association, and Consumer Federation of America announced the start of a new and innovative program to protect consumers and financial institutions from fake check scams.Under the program, participating banks and credit unions in the greater Los Angeles area will hand a brochure created by CFA, “Don’t Become a Target,” to every consumer who comes in to deposit checks or money orders of $1,000 or more or to withdraw $1,000 or more.Seventeen banks and credit unions have signed up to participate thus far. “The key is to prevent consumers from being victimized by educating them about these scams at the very point where they may be at risk,” said Susan Grant, CFA’s Director of Consumer Protection, who is coordinating the program.

In fake check scams, the consumer receives a genuine-looking check or money order for something and is asked to wire money somewhere in return. For instance, the check may be described as an “advance” on millions that the consumer has won in a sweepstakes or lottery. The consumer is instructed to send money to pay the taxes and claim the rest of the prize. In another popular scenario, the consumer is recruited to work at home as a “mystery shopper” or processing payments for a company and is instructed to send money somewhere as part of the job. No matter the story, the check or money order is phony, and when it bounces, the victim owes the money back to the financial institution where it was deposited or cashed. The average loss is $3,000 to $4,000. “It’s impossible to detect these counterfeits just by looking at them,” said Rigoberto Reyes, Acting Director of the Los Angeles Department of Consumer Affairs. “The message that we want to give consumers is that there is no legitimate reason why anyone who wants to give them money would ask them to send money anywhere in return. If that’s the deal, it’s a scam.”

Federal law gives consumers the right to access their funds quickly, usually within a day or two. But it is often difficult or impossible for the consumer’s financial institution to tell if there is a problem with a check or money order until it goes through the system to the person or company that supposedly issued it. That can take several days or weeks.

“This campaign helps consumers understand that they need to watch out for these fraudulent schemes, because they are ultimately responsible for the checks and money orders they deposit or cash,” stated Beth Mills, Vice President of Communications at the California Bankers Association. “California banks are committed to helping our customers learn how to protect themselves from these harmful scams. We are pleased to be a part of this education campaign to educate consumers, who are in the best position to know if the source of the check or money order they’ve received is trustworthy.”

“Fake check scams are a serious problem for consumers. Credit unions want to do all they can to educate their members. That’s why we’re excited to be a partner in this consumer education program,” said Diana Dykstra, President and CEO of the California & Nevada Credit Union Leagues.

CFA is providing the brochure to participating banks and credit unions at no cost (CFA is asking them to cover the shipping expense if they are able to do so). To help the financial institutions prepare for the project, CFA gave them training materials about fake check scams and advice about handing out the brochures. In addition to the hard-copy brochure, which is English on one half and Spanish on the other, there are two electronic versions, one in English and the other in Spanish, on CFA’s Web site at www.consumerfed.org/fakecheckscams. There visitors will also find a new PowerPoint presentation that CFA has created for consumers and other educational materials about fake check scams.

Quantities of the brochure will also be available to government agencies such as the Los Angeles Department of Consumer Protection and nonprofit organizations in the state that conduct consumer education. CFA is not offering hard-copies of the brochure directly to consumers.

Participating financial institutions in the greater Los Angeles are listed below. Banks and credit unions that have not yet signed up to participate are welcome to do so and should contact Susan Grant at CFA, 202-387-6121.