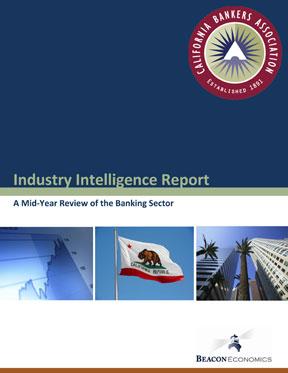 This report begins with an overview of the banking and lending environment for 2013 including a look at economic trends, demand for credit and an outlook for banks, and it concludes with a review of the federal interest rate environment, money supply and Federal Reserve policy. Among the report’s key findings:

The report also details how the fundamentals of bank balance sheets are also much improved over the past year. Net charge-offs were virtually non-existent last year with approximately 0.03% of total lending charged off at California-based banks.

“As evidenced by the findings in this report, we are seeing a significant increase in loan volumes at California-based banks, proving the point that banks are making loans to qualified borrowers. Meanwhile, banks are much healthier now than at any other point since the Great Recession in 2008,” said Rodney Brown, president and CEO of the California Bankers Association.

The report concludes with observations from the report’s authors about impending action from the Federal Reserve. The authors do not anticipate interest rates moving up much during the next two years. They write that the Fed is on schedule to start slowly adjusting short-term rates with a modest hike in the Federal Funds Rate early next year.

Please contact Beth Mills to schedule a media interview with the study authors.

About the California Bankers Association (CBA)

Established 123 years ago, the California Bankers Association (CBA) is one of the largest state banking trade associations in the country. CBA leads the way in developing relevant educational and legislative solutions to some of California’s more pressing financial and banking issues, including financial empowerment, identity theft, financial privacy, and financial elder abuse. CBA’s membership includes the majority of California’s commercial, industrial and community banks and savings associations. For more information, visit www.calbankers.com.

Beacon Economics, LLC is an independent economic research and consulting firm with offices in Los Angeles and the San Francisco Bay Area. The firm delivers economic analysis and data sites that help their clients make informed, strategic decisions about investment, growth, revenue, policy, and other critical economic and financial issues. Their nationally recognized forecasters were among the first to predict the collapse of the housing market and foretell the onset and depth of the economic downturn that followed. Core areas of expertise include economic and revenue forecasting, market and industry analysis, economic impact studies, economic policy analysis, and international trade analysis.

Back
This item appears in:
This press release has been archived and may contain content that is out of date.